An achievement unmatched by any nonprofit in the U.S. 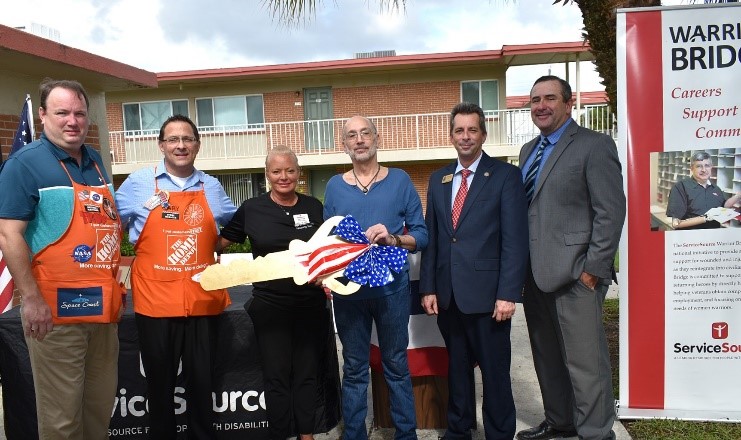 “Partnering with ServiceSource to fulfill the American dream of home ownership is phenomenal” said Gary Lintner, Titusville Home Depot Store Manager. Litner officiated the donation of ServiceSource Florida’s fifth fully-renovated mortgage-free condo at Crestview Villas in Cocoa, Florida to U.S. Navy Veteran, Joseph Fowler. This is the 70th veterans’ home renovation completed with The Home Depot Foundation and Team Depot, which is an achievement unmatched by any nonprofit in the U.S.

Fowler is a five-year veteran of the U.S. Navy. He served as a Marine Navigator Quartermaster aboard the nuclear-powered, guided-missile cruiser USS South Carolina, attached to the Eisenhower Task Force in the Gulf of Oman during the Iran Hostage Crisis. He was awarded a Sea Service Ribbon and Navy Expeditionary Medal after he was honorably discharged in 1984. 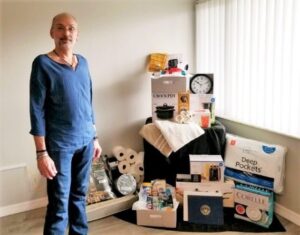 After separating from the Navy, Fowler sustained a severe head injury which precluded him from working. He spent the past eight years at Housing for Homeless in Rockledge, Florida. When Fowler first laid eyes on his new home, captured on camera by WESH-TV 2, he was grateful – “I never thought this was possible a year ago. [This is] the next step forward for me. I have the peace of mind knowing I’m in a solid location that I own and can improve upon” he said.

We were honored for the Patrick Air Force Base (AFB) Honor Guard to open the ceremony once again with Presentation of Colors and the National Anthem. This was followed by comments from Patrick Gavin, District Director for U.S. Congressman, Bill Posey (R-8th). Gavin presented Fowler with an American flag flown over Washington, DC in Fowler’s honor. We also warmly welcomed Jake Williams, City of Cocoa Mayor, and several members of the Home Depot team, who spent hours of time volunteering to renovate the condo.

As Fowler accepted the keys to his condo, the team who made this possible joined him, including Matt Motko, ServiceSource Florida Executive Director and Lisa Ciccolelli, ServiceSource Florida Housing Director. Fowler sincerely thanked all the contributors for their support. “I never thought I’d be a homeowner,” he said. “This opportunity came out of nowhere and it was a blessing.” 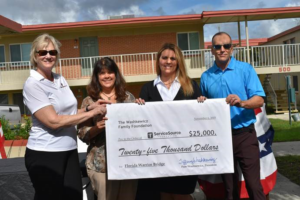 “My family is extremely pleased with how you distribute and account for our gifts,” said Washkewicz. “Warrior Bridge does an amazing job of reaching veterans in need and profoundly impacting their lives by specifically targeting their individual needs.”

The Washkewicz Family Foundation also made a generous contribution to the Patrick Air Force Base Foundation’s Veteran’s Fund in recognition of the Honor Guard’s Presentation of Colors.