Published in Our Stories 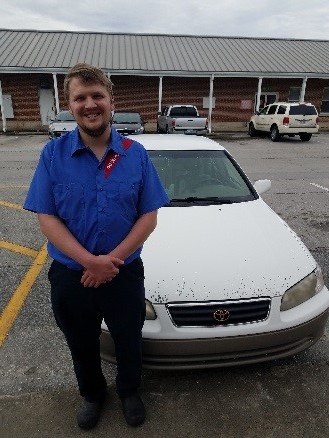 The team at MCAS Cherry Point is currently celebrating with one of their program participants, Bryan Bundy.  Bryan has worked with ServiceSource for three years and has grown tremendously during his tenure in the program.  In August 2015, Bryan set his sights on getting his driver’s license.  He did not pass the exam during his first two attempts; rather than be discouraged, Bryan reached out to his friends, family, and co-workers for support.  He successfully became a licensed driver in February 2017.  More recently, Bryan informed the Management team that he had a new goal in mind and he wanted to purchase a new vehicle.  Sitting down with Project Manager Eric Lippert, Bryan came up with a monthly budget to determine how much he could afford to spend.  As a part of this process, Bryan worked independently to shop around for a different car insurance company, saving himself more than $100 per month!  Other expenses were identified and reduced and within a short amount of time, the dream became a reality.  On February 12, 2018, Bryan purchased his new car.  The entire ServiceSource Management team at Cherry Point is incredibly proud of all the hard work Bryan put in to make his dream a reality – not to mention how great it is to see his smile as he pulls into work each day!