The Community Partner of the Year Award was presented to The Salvation Army Suncoast Family Stories – Ashley and Morris Jackson. Over the past three years, the Salvation Army Suncoast Family Stores have provided 11 internships in three counties, six different stores, for both our Pinellas and Pasco High School High Tech Programs. From Spring Hill to St. Petersburg, Ashley and Morris Jackson, managers of the Suncoast Stores have opened their doors and their hearts to our students. 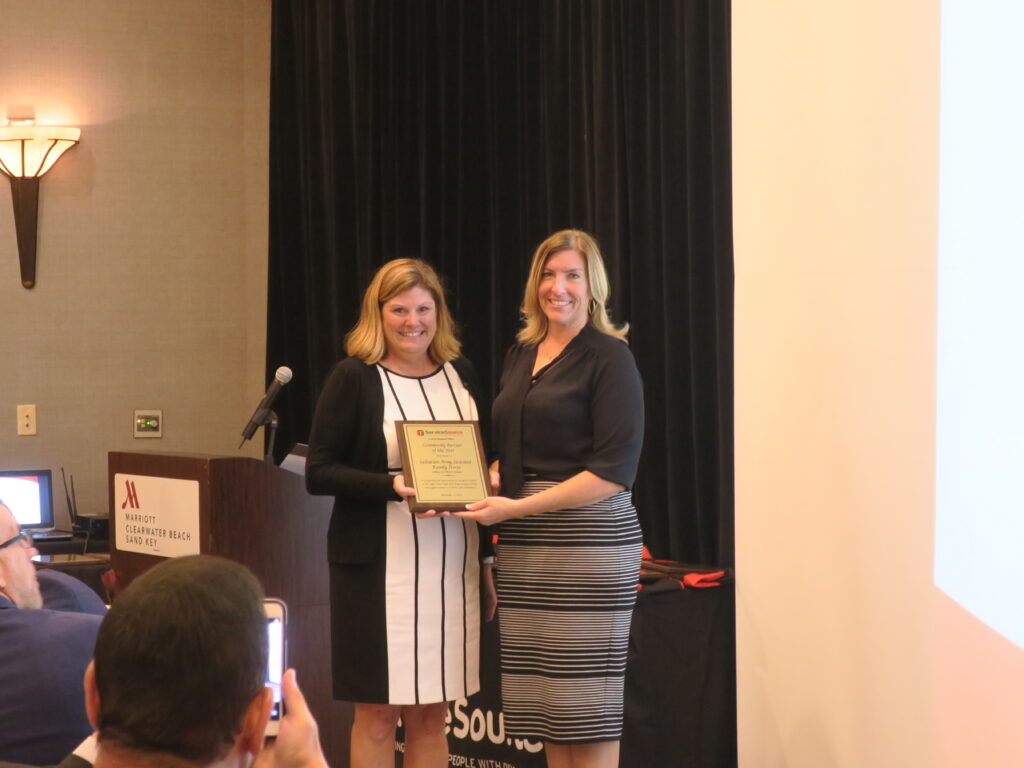 Community Partner of the Year - Skip Milos and Rick Vaughn

While all HSHT students could benefit from job or career shadowing opportunities, there are not many readily available. That was not the case when Rick Vaughn, VP of Joe Madden’s Respect 90 Foundation got involved with ServiceSource. ServiceSource Staff asked if Rick had any suggestions for a high school student, Alex, who was pursuing his dream to be a sports photographer. Rick didn’t hesitate to help and offered to contact the Tampa Bay Rays Team photographer on ServiceSource’s behalf. Rick connected ServiceSource to Skip Milos, the Ray’s photographer. Skip invited Alex to shoot a Rays game with him, and took a picture of him for his press credential.  Read Alex’s story here. 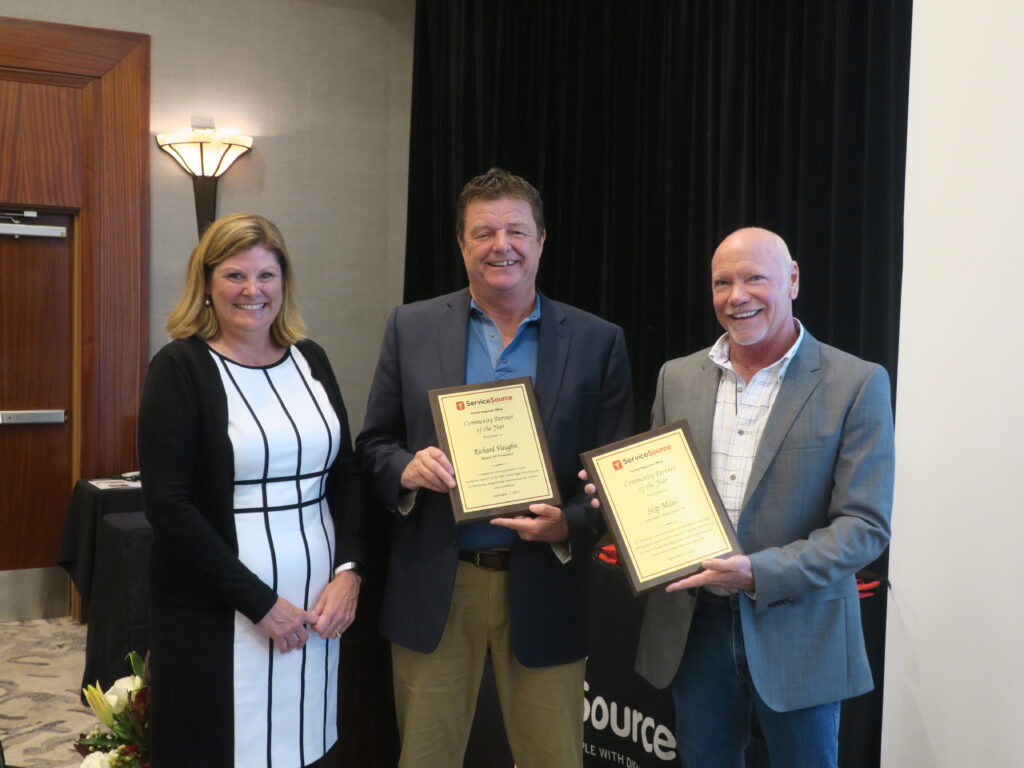 Travis Coulliette from The Arc of Alachua has been providing supported employment services to the Gainesville office for the last two years. In this brief period of time, Travis has raised the bar on the expectations of a job coach. He has successfully placed numerous individuals and has gone above and beyond to ensure they maintain their employment. 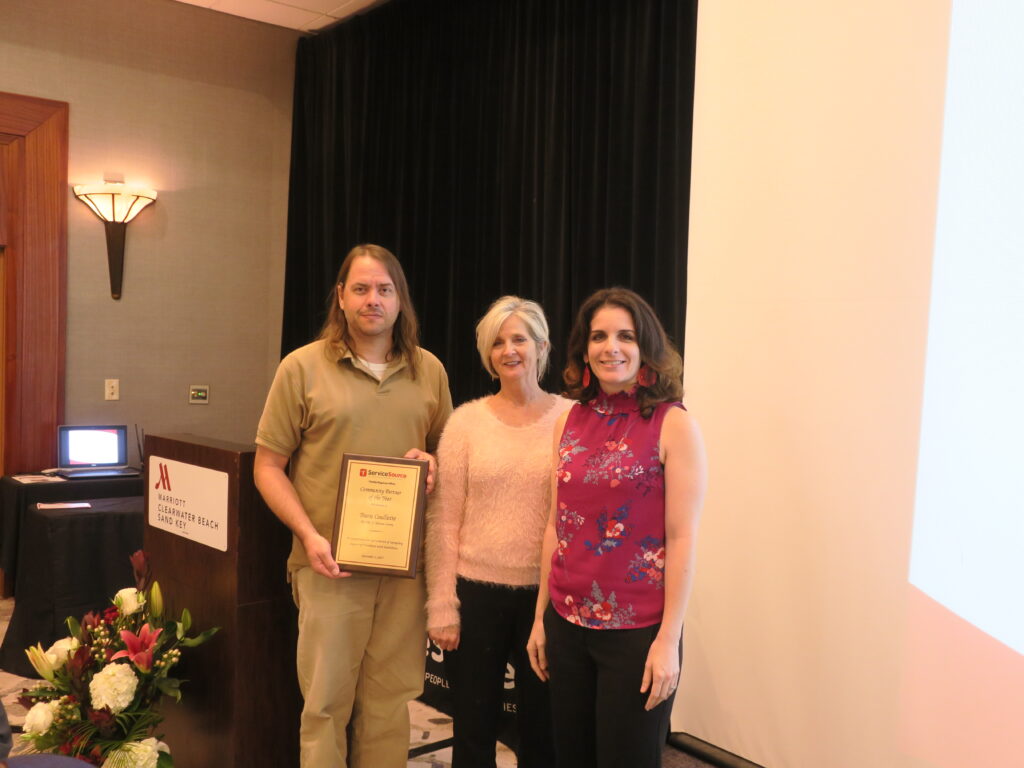 Corporate Citizen of the Year

Thanks to a partnership with Bayside Solutions CEO Dan Doyle and his customers, U.S. Army Ranger Brian Gangstad now owns a new $18,000 all-terrain TracFab wheelchair that gives him access to trails, beaches, parks, woodlands, and pastures. Doyle has also pledged $18,000 to purchase and deliver another TracChair to a combat veteran this year. 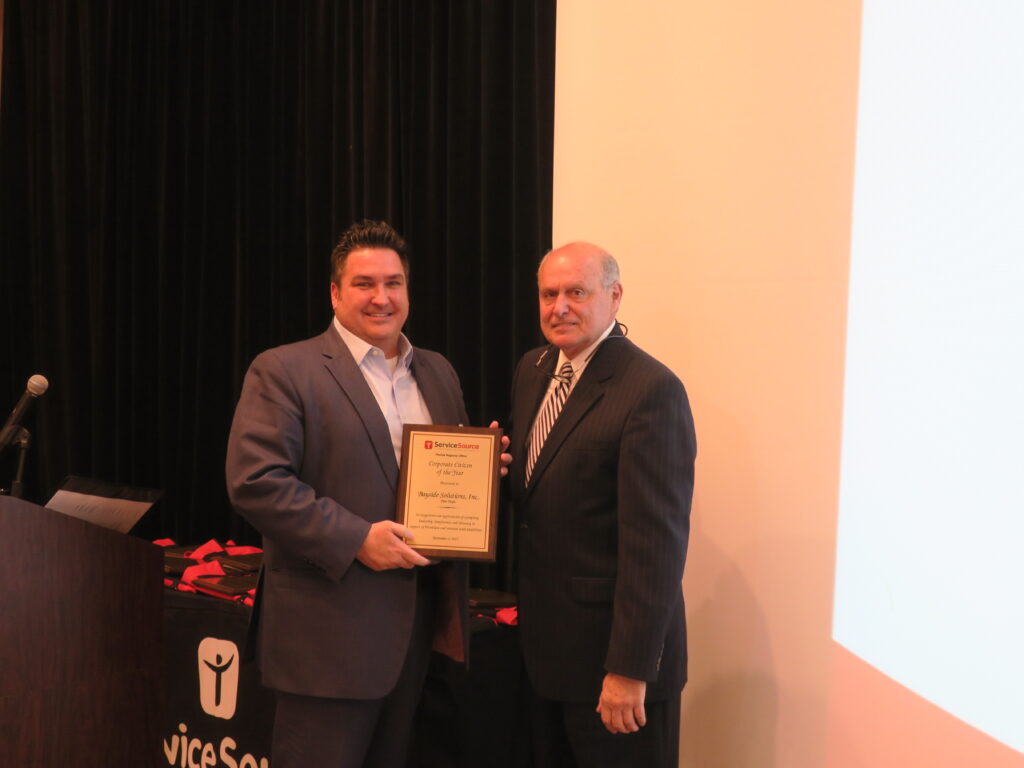 Community Employer of the Year

Ruby Tuesday’s of Ocala manager Ignatio Duarto, who likes to be called Iggy, was extremely receptive and courteous to all three ServiceSource Supported Employment clients seeking part-time positions. During the interview process, Iggy conducts informational interviews with the candidates and their family members, if needed, prior to being hired in order to ensure they feel comfortable with the job duties and that the client would be safe and happy. Iggy is very approachable, easy to communicate with, patient, and understanding, which helped with ensuring a natural support for each client. 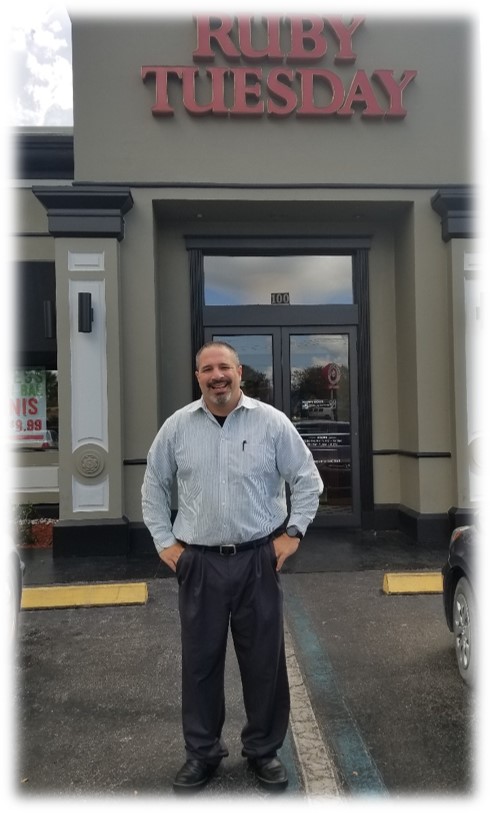 Job Placement Specialist of the Year

Sarah Corden was referred to the ServiceSource Tallahassee office for placement by Vocational Rehabilitation in 2013. With her skillset, Sarah was a perfect fit for an open switchboard operator position at the State of Florida Division of Management Services information hotline – a RESPECT of Florida contract staffed and operated by ServiceSource. After serving at the call center for exactly two years, ServiceSource promoted her to placement coordinator at the ServiceSource Tallahassee Rehabilitation Office in April of 2016. Sarah has worked extensively with creating and maintaining the Tallahassee WIOA referral program where she maintains a 100 percent placement rate for her graduates, as well as working with our adult population. 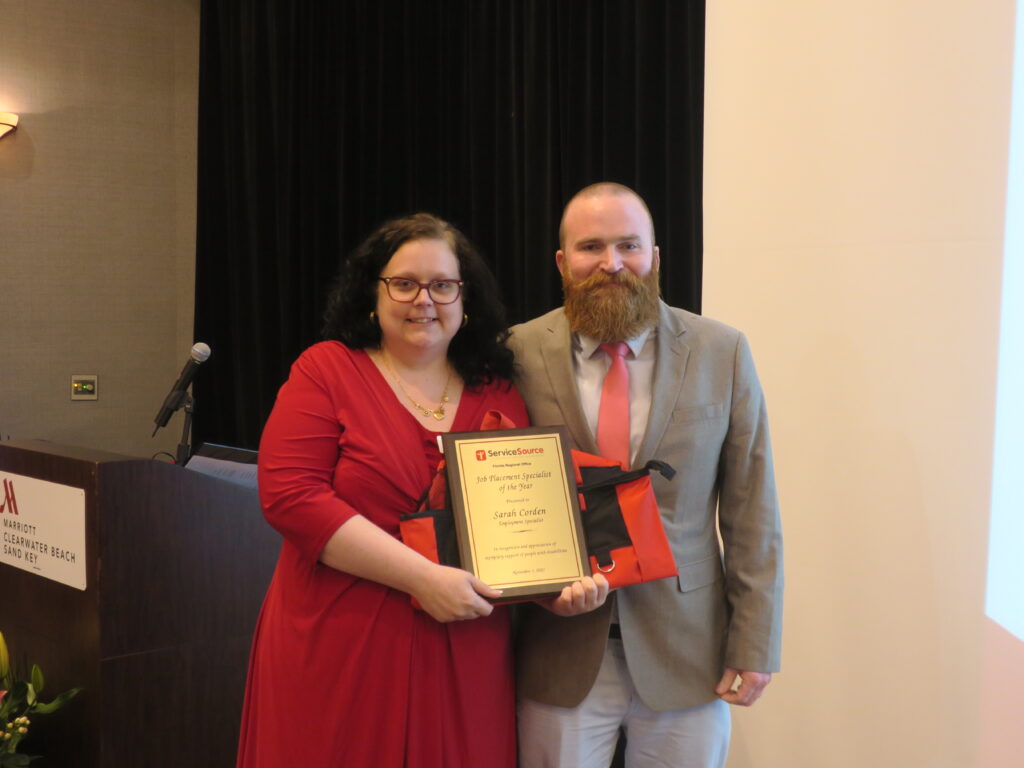 Rehabilitation Professional of the Year

Lucas Halverson was recognized as the Rehabilitation Professional of the Year for the ServiceSource Privatized VR offices. Lucas supervises a staff of 13 in Coral Springs and manages the office with great leadership and organization.  He’s highly respected by peers, staff, vendors, community partners, and VR personnel. Lucas always goes the extra mile to ensure he completes his projects in a timely and accurate manner.  He proactively seeks and shares with peers productive and time-saving measures, and exhibits purpose in his work, interactions with others, and life. 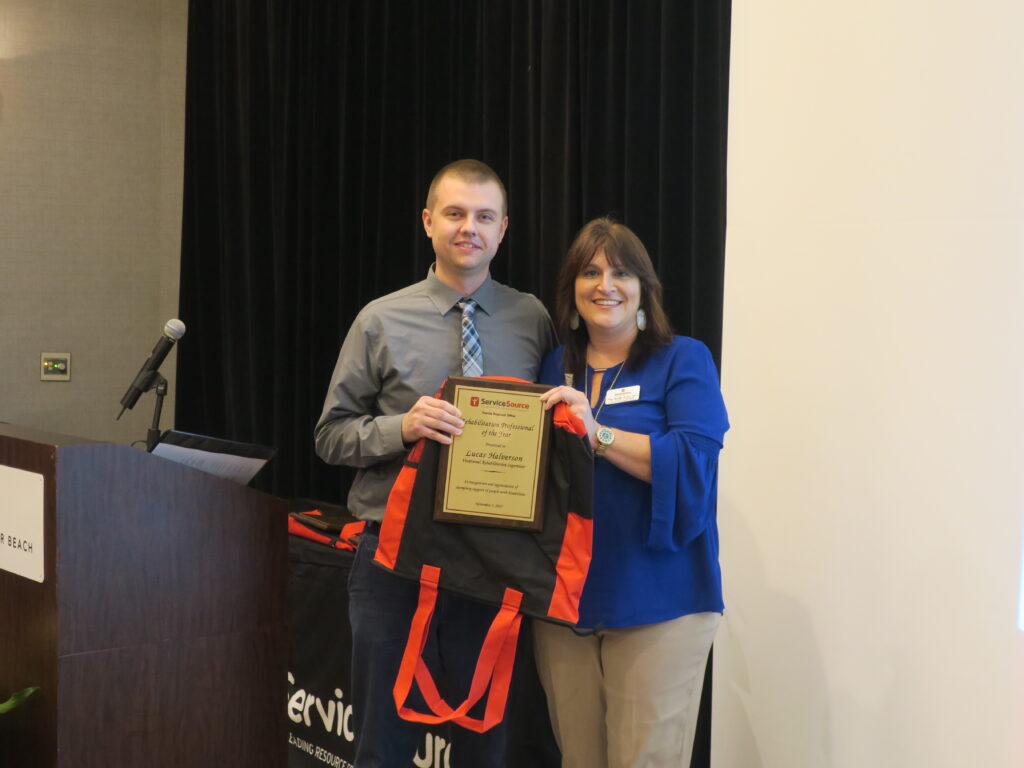 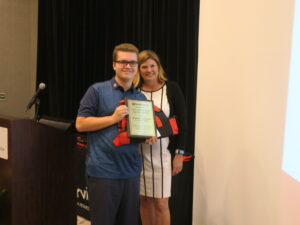 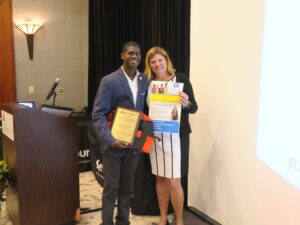 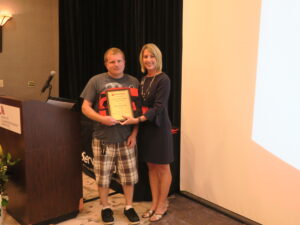 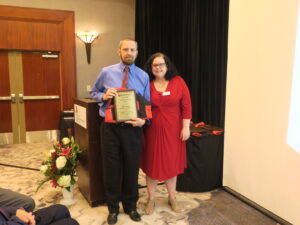 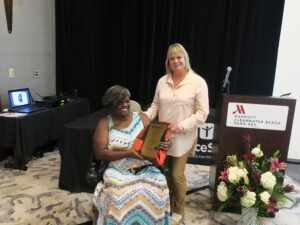 Supported Employment of the Year

ServiceSource Florida recognized Alex Dutton for Supported Employment Placement Employee of the Year. Alex is a Utility Worker and Prep Assistant at 4 Rivers BBQ on the Florida State University campus. He assists his fellow kitchen staff with food preparation including filling sauce cups, chopping vegetables, and gathering ingredients for recipes. Alex informed ServiceSource staff at his intake appointment that he wakes up every morning and tells his family that, “Today is going to be great day!” ServiceSource received feedback from several interviewers that Alex shows that he has come from a family with an exceptional work ethic and a drive to succeed. 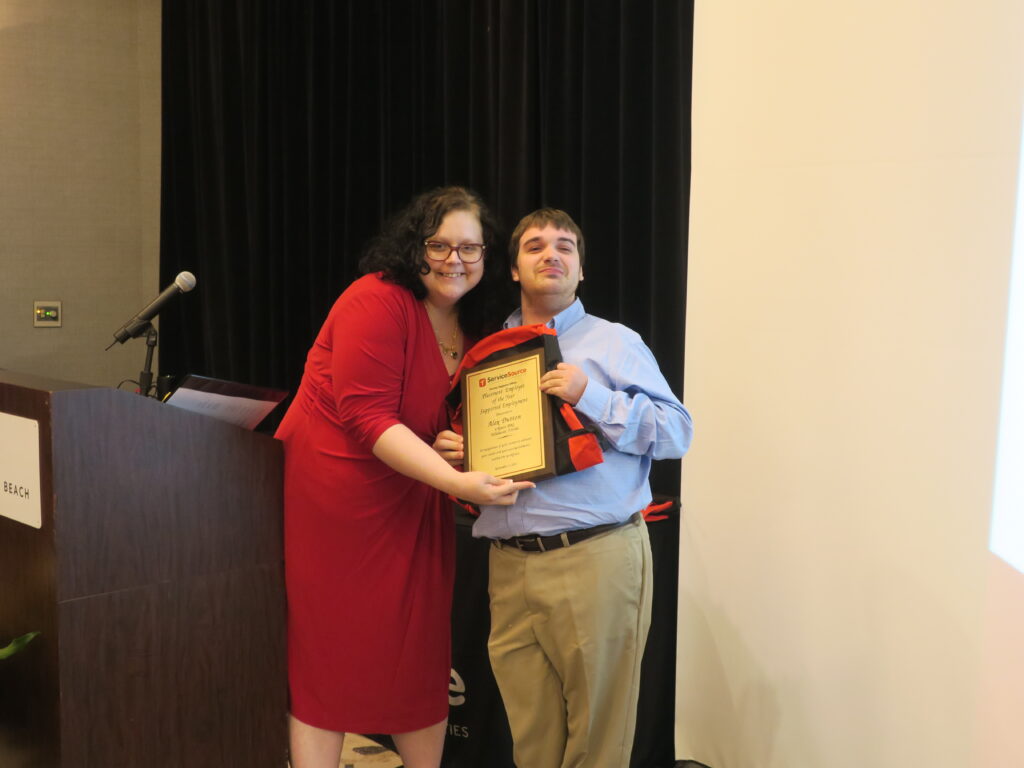 ServiceSource Florida recognized Robert Ritt, U.S. Army Veteran with our Warrior Bridge Placement Employee of the Year Award. Robert enlisted in the U.S. Army in 1997 at the age of 17 with parental consent. In 2003, Robert’s unit was deployed and tasked with building forward operating bases for American and Iraqi forces. Although not physically wounded, Robert witnessed events that would stay with him forever. He returned home after his deployment and was honorably discharged in 2005. Despite his years of experience, PTSD prevented him from keeping a job. Robert continued to struggle with combat stress and alcoholism, and eventually became homeless.

Warrior Bridge used Barrier Removal funds to reinstate Robert’s driver’s license and helped him secure a job at DPR Construction Tampa, an employer who immediately recognized his expertise in heavy equipment operation and promoted him to a position of leadership. Robert now resides in a homeless shelter at Tampa Crossroads – a veteran’s service organization and ServiceSource referral partner. He’s preparing to move into his own apartment in Tampa and will be outfitted with a Veteran’s Mall home-starter kit. 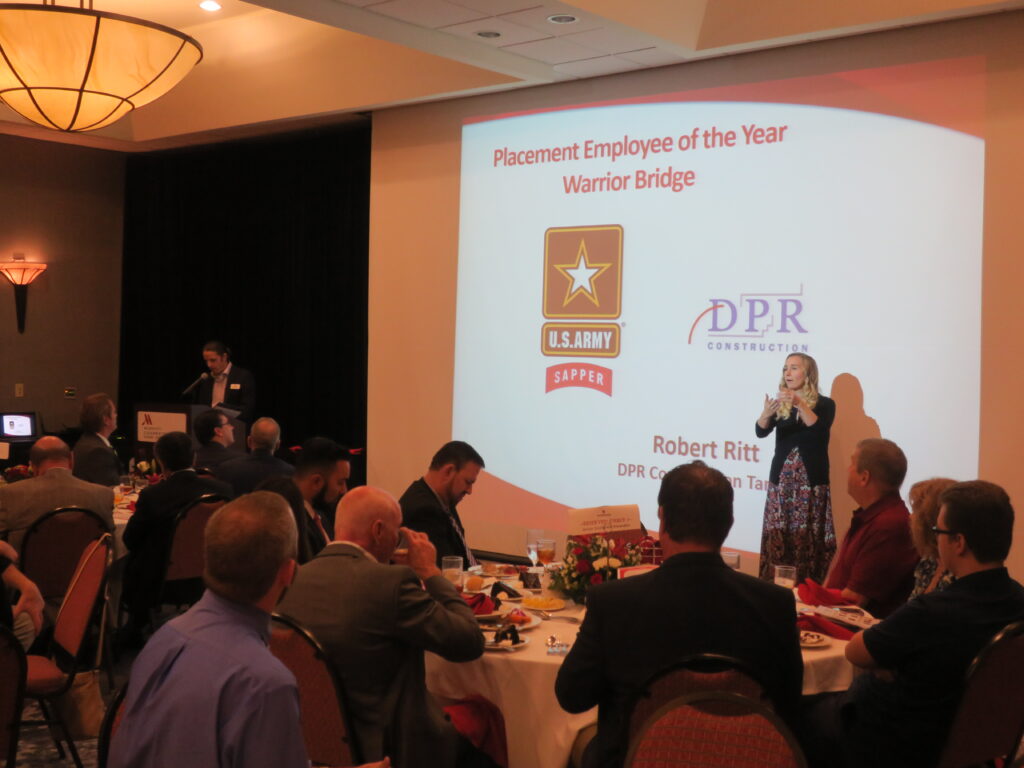 Henry Torres started working with ServiceSource Florida in April of 2017. He is from Puerto Rico and had only worked for a month as a seasonal employee at K-mart about 20 years ago. Since then he worked as a caregiver for his mother, who was ill. When she passed away, he moved to Florida to seek employment. With assistance from his job coach, Henry found a janitorial job at St. Paul’s Independent School. Henry’s been there since July and continues to excel at his duties. His co-workers have been very accommodating and have even started learning some American Sign Language. Henry is always smiling, working hard and up to any challenge. 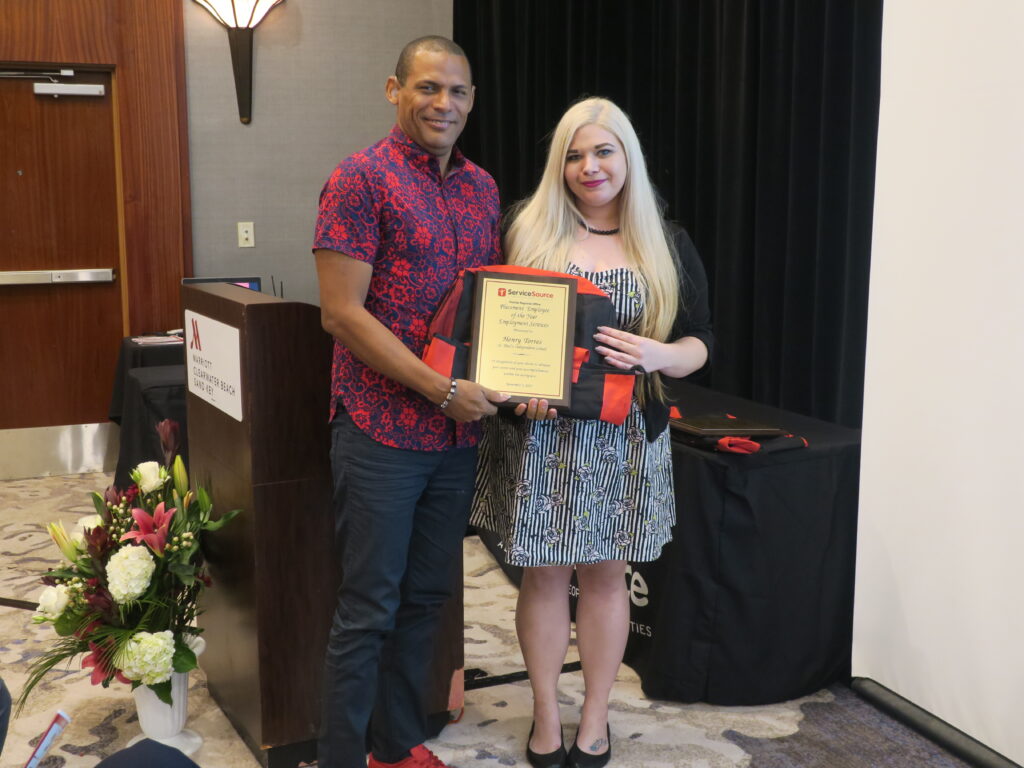 Placement Employee of the Year-Supported Employment

ServiceSource Florida began working with Geoffrey Clingenpeel in January of 2017. He is from Alexandria, VA and worked for almost 30 years as a mailroom clerk for various government and military contracts. He retired and relocated to Florida with his parents. Geoff decided he wanted to work in Florida. With the help of his job coach, Publix interviewed Geoff for a front service clerk and offered Geoff the job. Geoff has been working for Publix since August and has been doing a superior job. 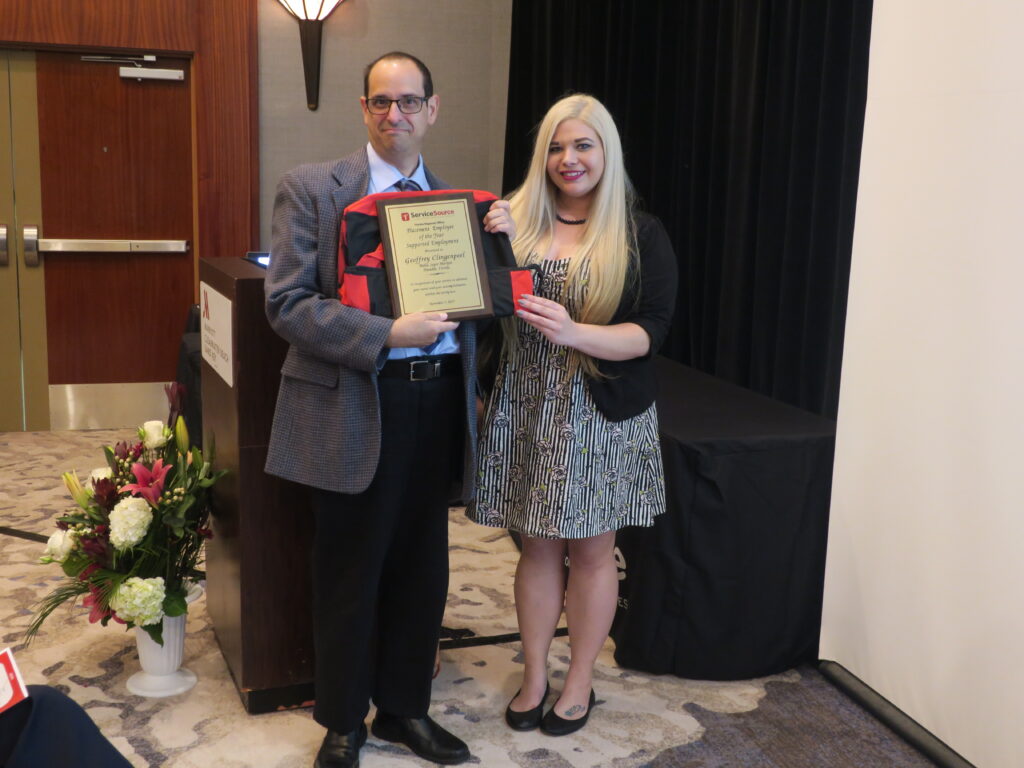